The Rivalry Between Louis Comfort Tiffany and John La Farge

In the last two decades of the nineteenth century in America, the introduction of opalescent glass revolutionized the thousand-year-old art of stained glass. Opalescent glass has a milky opacity created by the suspension of particles that reflect and scatter light. While the material had been in use for tableware - glasses, pitchers, vases, toiletries, boxes - for decades, it had never before been made into flat sheets for use in windows. Beginning in 1879, its application to windows created an immensely popular decorating sensation within a few years. Pre-eminence in this market spelled material success, and the competition for clientele quickly became a pitched battle between the two artists who first introduced the material: Louis Comfort Tiffany (1848-1933), a young sometime painter and respected decorator (Fig. 1), and John La Farge (1835 1910), an accomplished easel painter and illustrator recently turned successful muralist (Fig. 2). During their lifetimes, their antipathy for one another was bitter and their competition for the stained glass market was fierce, an indication of the value and importance that stained glass acquired during this period.1 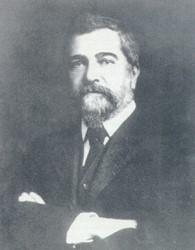 By the mid-1890s, the issue between these two great artists had become one of seniority: which of them had first introduced opalescent glass in stained glass windows? The question has remained to this day, with every succeeding generation of books and articles on each artist claiming pride of invention. But historical research provides the answer, along with the reason for the question in the first place. Hubris, financial and social disaster, opportunism, and ultimately market share are in large part the explanation.

Prior to 1882, relations between the two artists were not acrimonious. Writing many years later, La Farge related that Tiffany had visited him in the 1870s. La Farge had willingly shown him his experiments with opalescent glass and plating (the layering of one piece over another to achieve colors or effects), clearly establishing that it was he who introduced Tiffany to the material.2 If we accept La Farge's recollections that he and Tiffany were on apparently good terms at that time, friendly enough for La Farge to show the young artist his work, clearly something went wrong after that. 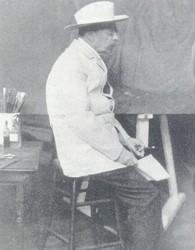 There is evidence of what appears to have been a legal dispute of major proportions between Tiffany and La Farge in the early 1880s. References to lawsuits lurk in La Farge's correspondence as well as in letters and reminiscences of others. The details, however, have not come to light, never having reached any public forum such as a court or the newspapers, and only being hinted at by the parties many years later. It seems to have centered on the rights of either artist to claim precedence and exclusivity in the use of opalescent glass in windows through their patents for it. The fact that the two artists were so fiercely opposed to one another for thirty years, to the exclusion of all other opalescent glass artists, is explained by their apparently unresolved argument.