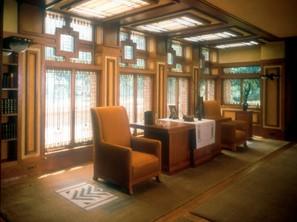 These days, a Frank Lloyd Wright retrospective is a safe and redundant exercise. His status is a foregone conclusion, and praising him to the skies is rather like saying that Mozart or Shakespeare really was pretty great.

The past decade's Wright-worship has got so out of hand that merely a selection of the architect's windows, and those from the first half of his career at that, is enough to sustain a big New York exhibit. But rarely does one see the most basic requirement of architecture - keeping the weather out while letting the light in - executed so well as in Light Screens: The Leaded Glass of Frank Lloyd Wright, at the American Craft Museum. (One can't picture a comparable show of, say, Mies van der Rohe windows: Oh, look, a rectangle! Hey, another one). From the beginning of his career in the 1880s, Wright used leaded and stained glass to provide privacy without darkness. As his style developed, the designs grew intricate and geometric. Local flora became abstracted into asymmetrical, tawny-colored forms (as in the living room, pictured, of the Meyer May house in Grand Rapids, Michigan, 1909) that wouldn't be out of place in the Art Deco of twenty years later. (By which time Daddy Frank, as his assistants called him, had moved on; he stopped using leaded glass in the early twenties.) Sadly, the pedigree of Wright's houses has sometimes been their undoing, as unscrupulous homeowners sell off light fixtures and tiles and, yes, windows to collectors, in the process stripping these custom pieces of their environment and therefore their significance. Which means a museum exhibit like this does have its important sub rosa message: Look, but don't touch. (40 West 53rd Street; May 10 through September 2.) CHRISTOPHER BONANOS

<< Back to Long Term Projects