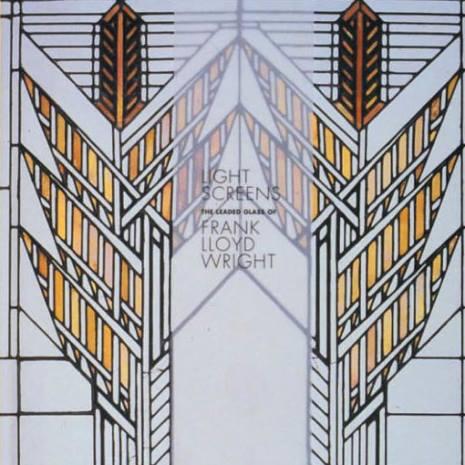 When glass conservator and scholar Julie Sloan came across her first Frank Lloyd Wright "light screen" in person, it sparked an almost 20 year endeavor to document these fragile pieces of American history. When she tried to learn more about the subject, Sloan was puzzled to discover that there wasn't more information available on Wright's beautifully designed, decorative, and functional "light screen" glass windows. In her new book on the subject, Light Screens: The Complete Leaded Glass Windows of Frank Lloyd Wright, Sloan mentions that Record was one of the only venues Wright used to discuss the subject in any detail. "The March 1908 and July 1928 installments of "In the Cause of Architecture"—Wright's serialized explication of his theories, published between 1908 and 1952 in Architectural Record—contain most of his comments on decorative glass; in no other article or book did he expand on the subject."

The result of Sloan's passionate quest to learn all she could about Wright's knack for glass window design are two books: a lighter, 160 page version titled Light Screens: The Leaded Glass of Frank Lloyd Wright and its more comprehensive version, Light Screens: The Complete Leaded Glass Windows of Frank Lloyd Wright. The second version, which is heavy enough to put a dent in most coffee tables, is a complete appraisal of more than 500 light screen windows, and the first book that completely studies this aspect of Lloyd's work.

A brief look through Sloan's book will clear up any argument about where to go for information on the subject of Wright's windows from now on. Light Screens does a beautiful job documenting the hard-to-photograph pieces of glass, and will serve as a resource for years to come. Wright's window terms, influences, materials, and techniques, as well as his theory of ornamentation, are each covered in detailed chapters in the book.

Sloan's book accompanies a touring exhibition (Lightscreens Facts) currently at the American Craft Museum in New York and sponsored by Steelcase, Inc. The fifty windows featured in the exhibit are worth a visit for Wright fans, particularly if you are already in the neighborhood, perhaps visiting the Museum of Modern Art, which is across the street. Many of the windows are being shown for the first time in public, and nearly half are drawn from private collections throughout North America, so they may never be on display again.

<< Back to Long-Term Projects