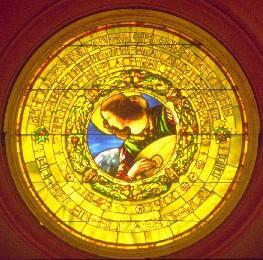 As a result of being charged with the restoration of several of John La Farge's most important stained glass windows, including "The Battle Window" in Harvard University's Memorial Hall, his windows in Trinity Church, Boston, and those in Judson Memorial Church, New York, Julie Sloan has been researching La Farge's stained glass for more than ten years. John La Farge (1835-1910) designed stained glass between 1874 and his death.

In 1994-95, that research was supported by a grant from the National Endowment for the Arts to enable her to photograph many of La Farge's windows in the greater Northeast. In 1995, a grant from the James Marston Fitch Charitable Trust enabled her to research the infancy of opalescent glass manufacture in the United States, an event with which La Farge was intimately involved. Sloan is planning on writing a book on the subject in the future.